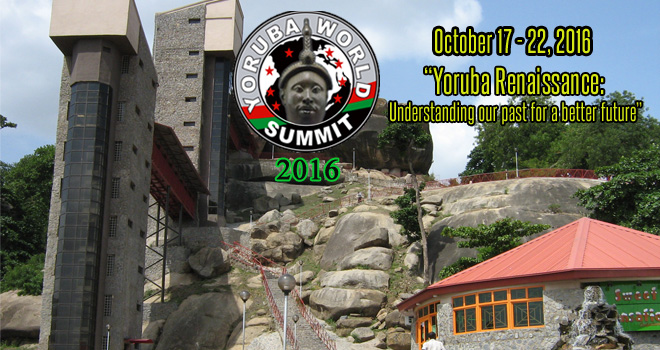 The National Association of Yoruba Descendants in North America (Egbe Omo Yoruba) through a joint meeting of the National Executives and the Central Working Committee for the proposed Yoruba World Summit reaffirmed its commitment towards the convening of the Yoruba World Summit in Yoruba land, which will be held at University of Ibadan International Convention Center in October from 17th to 22th , 2016.

The summit- Yoruba World Summit: “Yoruba Renaissance: understanding our past for a better future”- is expected to bring all Yoruba sons and daughter, home and abroad together to deliberate on the state of the Yoruba nation and set-out a future that will be prosperous for our youth and children, yet unborn.

The Egbe, is the umbrella organization of all Yoruba Organization in North America. Its mission includes the promotion of unity, progress, and empowerment of the Yoruba in Nigeria and Diaspora for peaceful coexistence based on justice for all.

The week-long Summit, will be a global event where Yoruba sons/daughters and leaders, at home and abroad will gather to assess the state of the Yoruba people, strategize and plan activities for the years ahead, as well as attempt to address current issues that are of concern to all Yoruba especially in Nigeria. We will be expecting over a Thousand (1,000) delegates and guests are expected to attend, including all Governors of Yoruba States, Politicians, Administrators, Obas`, activists and other community leaders.

Egbe recognized that Yoruba nation has taken some strides towards our progress in relation to past three decades, but we cannot afford to be complacent about the

reality of the forces and challenges we have to contend with as we strategically construct purposeful and prosperous future of our children. We have to deal with our present through a knowledge and understanding of the past, to craft a vision for the future.

Egbe believe that it’s high time for Yoruba to take hold of “our trailblazer” status in our conceptualized geographical location. We have to restructure our educational scheme, social welfare programs, agricultural development projects, commercial orientation and polity to conform to the trends of technological developments in the 21st century.

Egbe also believe that the Yoruba World Summit will be a forum where Yoruba Agenda which would be clearly articulated at the National Conference will be revisited and reviewed.

Yoruba Agenda includes: a self governing and autonomous Yoruba region where the energy of the Yoruba can be galvanized for progress and development, educational resurgence, social stability, cultural renaissance and absolute control of her destiny; where principles of true federalism, justice and equity shall reign; shall have the master control of its internal affairs, including security, power, education, health, commerce, agriculture, economy and human resources.

The National Association of Yoruba Descendants in North America strongly believes that the agenda from the Summit will produce a course for the future of our children in this “jet age”.

Let us all join hands in making this Summit a landmark achievement towards the future of Yoruba nation and our children.