The theme for this Silver Jubilee/25th Convention:

As we begin to celebrate our Silver Jubilee, there is need to have a peep at  the birth of the Egbe as told by the first president- Aare KOLAWOLE AYODELE-OJA

We, the Yoruba, desiring to trust and enjoy the fellowship of one another,

Desiring to promote the interests and welfare of one another,

Committed to and guided by deep sense of justice and honesty,

Individually committed to excellence in performance,

And convinced that we can build a stronger economic, political,

And social community in Yoruba land, in Nigeria,

And around the world, do pledge to promote the unity, progress,

And empowerment of the Yoruba in Nigeria,

And Diaspora for the peaceful coexistence based on justice.

We hereby resolve to constitute into the

Without mincing words, Egbe Omo Yoruba Yoruba North America (EOY) history is rooted in the Yoruba culture, and by extension Yoruba society.   1994 after the annulment of the 1993 general election won by the Aare Ona Kankafo of Yoruba empire Moshood Kashimawo Olabiwoninu Abiola by Former military president General, Ibrahim Badamosi Babagida. This led to Yoruba people being endangered. It was endangered because the Yoruba people were denied the opportunities to realize their cultural potentials by a well-orchestrated process.  It is axiomatic that once a community or society loses control of the means of determining/organizing/distributing its cultural values, it automatically stands a good chance of having its economic/cultural interests eroded by forces that prevent it from setting its goals and moving uninhibited toward the realization of such goals and the cardinal values that subtend them.

When it became obvious that the cultural values of the Yoruba people were being eroded, values which includes (1) Our democratic spirit, (2) achievement orientation, and (3) tolerance of the other or of difference.  Those who are familiar with the traditional political system of the Yoruba need not be reminded of the inherent democratic character of the Obaship systems.  The traditional system of consociationalism illustrated by the devolution of powers and the delegation of policy formation and implementation to ward levels and thus to the grassroots across the Yoruba space from Okitipupa to Kabba, and from Akoko-Edo to Ketu is too well-known to deserve further mention.   It is, however, important to state that the culture of critical engagement traditionally nurtured in the average Yoruba citizen–illustrated by various forms of oppositional discourse in our rituals, festivals, and community events, has been reproduced in the postcolonial context in the concentration in the southwest of critical media and general critical response to repressive policies by self-appointed trustees of the Nigerian system.

This culture of critical thinking and response to issues has been used to vilify and stigmatize us as troublemakers by most of our neighbours, especially the Islamic North.  We have since 1960 and are still being prevented from realizing our cultural potentials in the realm of political organization of our life because we have refused to be turned into docile, spittle-licking, grovelling citizens that are more than ready to slavishly pander to the becks and calls of the Fulani Emirs, then in 1994 represented in Nigerian public life by Northern Army generals and their cronies or appointees from the south.

The attack by the Abacha Military government on  the Yoruba–the systematic destruction of our educational system, the economic system, and the political system which back in 1994 led to the arrest and imprisonment of Moshood Abiola & General Olusegun Obasanjo, the killing of late Papa Alfred Rewane and the death during the struggle of Papa Adekunle Ajasin, the sending into exile of late Papa Antony Enahoro, former chief of Army staff General Alani Akinrinade, the first black African Nobel Laureate  Professor Wole Soyinka, former Minister of foreign affairs Professor Bolaji Akinyemi, former Minister of works, late Dr. Wahab Dosunmu, former governor of Kwara State Chief Cornelius Adebayo, former governor of Lagos state Senator Ahmed Bola Tinubu  and many other Yoruba prominent elders who later join forces with Egbe Omo Yoruba in North America;  they are  designed by Abacha Military regime to bring us the Yoruba to our knees before the sultanistic despots and their surrogates in civilian or military garbs, and a few cronies selected from our very worst representatives in all spheres, ranging from Obaship to the professoriate.

Our enemy impoverishment strategy had by then reached an embarrassing point as many of our people can no longer bury their parents or relations in Lagos and Yorubas in Diaspora cannot travel home because of Abacha policy of assassination of the opposition.  For those who have been away from Lagos for some time, a new culture has been engendered in our people; they now throw the corpses of their relations into Atan cemetery without proper rituals.  Those who are familiar with Odu Ifa will know that our people credit themselves as the first set of people to initiate burial as we know it all over the world today. Then the same people throw the bodies of their relations in Atan cemetery because they have been impoverished to the point that they can no longer come up with the money needed to buy land in Atan or convey the corpse to his/her ancestral home in the interior of Yorubaland.  This example is to show how far down we have been pulled by the policy of the Military regime on the Yoruba by the leadership of the Military and Islamic North.  This lead to most of young Yoruba graduates joblessness; many were forced to seek jobs as prostitutes in European cities or to join groups of armed robbers at home.  Others from their twenties to the sixties were forced out daily to clean the toilets of people with less education than them in European and American cities.  While several Yoruba people with advanced degrees drive taxis in North American cities, many others work as night guards who are afraid to let their employers know that they have university education! 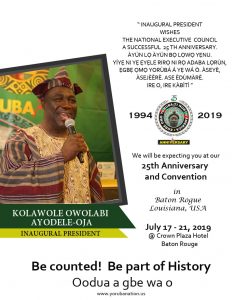 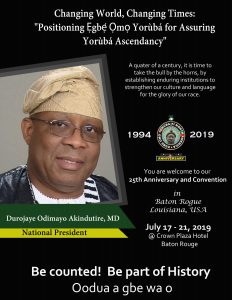