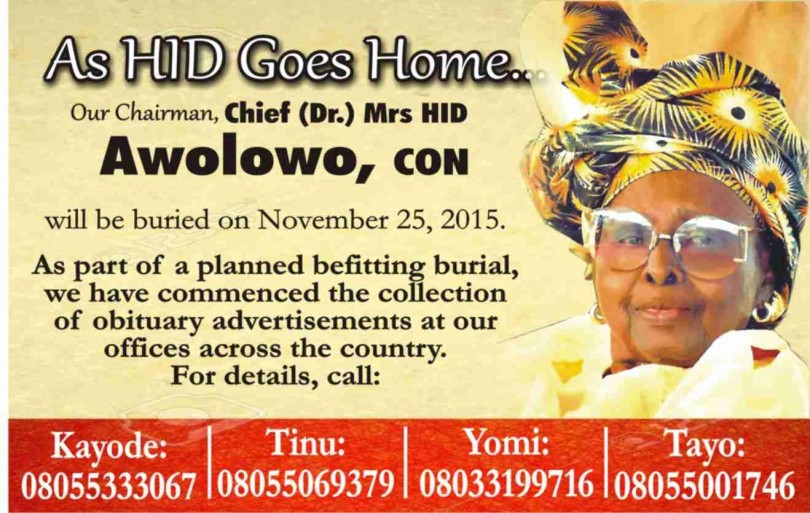 Hannah Idowu Dideolu Awolowo (née Adelana; November 25, 1915 – September 19, 2015), popularly known as HID, was born to a modest family in the small Ikenne community of Ogun State in Nigeria. She was married to politician Obafemi Awolowo from December 26, 1937 to his death in 1987. He famously referred to her as his “jewel of inestimable value”. She was also a successful businesswoman and astute politician. She played an active role in the politics of Western Nigeria. She stood in for her husband in the alliance formed between the NCNC and the AG, called the United Progressive Grand Alliance (UPGA), while he was tried and in jail.

The plans were that she would contest the elections, and if she won, would step down for her husband in a by-election. To fulfil his dream of becoming president in the Second Republic, she toured the length and breadth of the country with her husband campaigning. She also coordinated the women’s wing of the party and was always present at all party caucuses. A successful businesswoman, she became the first Nigerian distributor for the Nigerian Tobacco Company (NTC) in 1957. She was the first to import lace materials and other textiles into Nigeria. On September 19, 2015, she died at the age of 99 just over 2 months short of her 100th birthday. She was laid to rest beside her husband in Ikenne on November 25, 2015.